On the ultra-geeky front, I watched the original TRON last night, kindly leant to me by my buddy Doctor Dray. Having never seen it before, but heard a lot about it, I was keen to watch it at last. The core idea of computer programs personified is pretty cool, and the 80s rendering is interesting to watch (looks like stuff we did in computer graphics class at uni!). The plot does stretch belief a bit too thin at times though. To get an idea how far movie tech has come between the 80s and today, check out the original 80s trailer and the new Tron Legacy trailer.

Also, at high school, I and my fellow geeks spent quite a bit of time writing games in C like the TRON light cycle game, cunningly avoiding copyright violation by calling them NORT. After writing the 2 player version, we moved on to writing simple AIs so that you could play against the computer. Recently going through an old computer’s hard disk, I found the code for these. Thanks to the backward comparability features of Windows they still run, although they were written in Borland C/C++ for DOS! Amazing blast from the past.. here’s a picture of AI NORT in action: 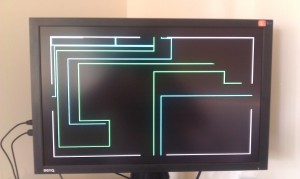