Recently, the phone calendar on my Samsung Galaxy S6 stopped synchronising with Google calendar. When I went to Google Accounts Sync in Settings, Calendar had the spinner next to it, but it was didn’t spin. Meanwhile, the calendar didn’t sync, and the battery was being chewed through more quickly than usual.

How to fix? Well the first thing I tried was deleting Calendar Storage. This worked for a day or two, and then the problem reoccurred. Next, tried deleting all my Google accounts and adding them back. That worked for about a week.

Finally, by a stroke of good luck, I was looking at the sync screen when I’d just plugged in the phone to charge – it synced fine. A lead at last! Likely something related to power settings!

I’d already poked around in the usual Device Maintenance > Battery > App power monitor screen, and all Calendar related apps where in the ‘Unmonitored’ list so wouldn’t be put to sleep. This section wasn’t the cause of the problem. I finally found the solution, in an additional hidden set of power saving options.

So.. To fix, go to Settings > Device maintenance > Battery > Battery Usage button > Vertical … at top right > Optimise battery usage. Choose All Apps from the drop down. Then disable Optimise for Calendar storage and your calendar apps. Voila! Finally calendar will sync reliably again!

I also had a similar issue with Google Sheets, Google Docs and Google Drive Sync. The same change in ‘Optimise battery usage’ settings for each of these fixed their sync as well.

I’ll be giving a short talk on Starting Android Development on Tuesday at the Sydney ALT.NET group.

Richard Banks (@rbanks54) will also be giving a talk on .NET bdd tools.

More info and RSVP on the ALT.NET blog. 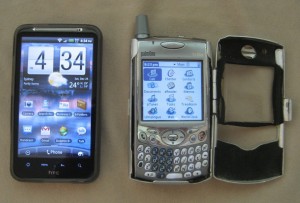 Palm and its Demise
I’ve been using Palm organisers and smart phones since the year 2000. I enjoyed developing for them, writing several medical applications, and using them extensively for calendaring, contacts and memos (PIM). The Treo smart phones were visionary at the time, providing integrated phone and PIM functionality, plus push email and basic web browsing.

I was at the lavish developer conference in Sydney, when Palm was the market leader, and announced they were splitting into two separate businesses – software and hardware, and developing a new OS (Cobalt), which never saw the light of day. After that, Palm slowly lost its lead. I would have been interested to try out Palm’s last throw – the Pre and WebOS – but it never made it to Australia. Now Palm has been purchased by HP, and it is abundantly clear that Palm has had its day, and it’s time to move on. Goodbye Treo 650 and Palm OS Garnet!

Where to next?
Well, major contenders for smart phones at this point are iOS and Android (sorry Windows Phone 7, maybe next release :)). The iPhone is a nicely crafted piece of consumer electronics, and it’s the obvious choice for many people. Personally, I like the polish, but find the limitations of the OS and clumsy notification system, vendor lock in and tightly controlled environment does not appeal. Android, especially with 2.2, is pretty smooth. It requires a lot more tweaking than an iPhone to get it to a good state, but once set up, it’s a really nice experience and lets you do quite a lot of stuff you can’t do on an iPhone. I chose a HTC Desire HD and Android 2.2.

Android Migration
What I particularly want to share is how I migrated my data across from Palm OS to Google services and Android 2.2, and what applications I chose to replace the beautifully crafted Palm PIM system. There’s still some Palm users out there hanging on, and I’d encourage you to take the leap and move over to Android.

Apps & Architecture
After quite a bit of research and trial, I decided to go with:

Conclusion
In conclusion, I now have my data and quite workable PIM functionality on my Android phone. Business Calendar has a great multi-day view that my old palm didn’t, but it is a bit slower to add new events. The HTC Contacts app gets pictures from Facebook which is pretty cool, and syncs with my gmail so I don’t have to maintain email addresses in two places. It is a bit more clunky to edit and add contacts though. On the memo/note front, B-folders encrypts notes which is cool… but a bit irritating to need to enter your password every time you launch the program. Also it is more clunky to edit notes and does not save your last open note, and position in the note between launches. The rest of the phone functionality is great though and a huge step forward from the Palm. It’s really for a separate post to talk about these, but good web browser, GPS with maps, train timetables, movie times near you, twitter client, etc make it an amazing device and well worth the upgrade.